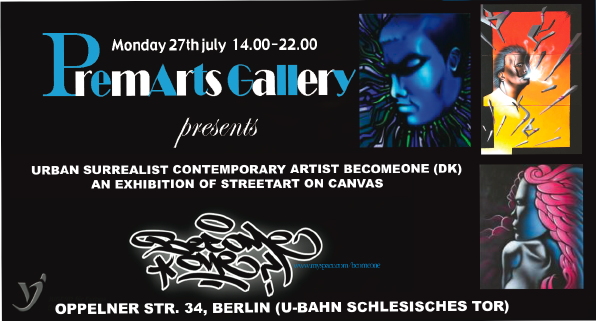 The art of visual communication has become a way of life for artist and graphic designer Becomeone. For many years, he has been putting up his name on large murals and other concrete surfaces with his own personal style and characters by using spraypaint. He has executed numerous commision jobs for customers such as Telia, TDC, Cowparade, Cirius, Zentropa, københavns kommune, schools, private homes and music studios among many others. He has executed two major projects sponsored by international youth organisation Cirius involving the art of graffiti, “UrbanGraffMovement” in 2005 and “The Becomeone Project” in 2007.

The projects received positive coverage by a long list of danish newspapers including Jyllandsposten. He has recently recieved a sponsorship grant for his artistic career from the good people of Georg Harms Fond. For over a decade BecomeOne has been a part of the international legal graffiti movement, painting and travelling in several countries around the world, and has collaborated with a long list of highprofile graffiti artists in countries such as France, Spain, Germany, USA, and many more. After long experience of painting on murals with spraycans, artist and designer Bill Thystrup decided to bring his creative ideas to the blank canvas. The main goal is to bring surrealism back, combined with the new urban graffiti and streetart style into the paintings, that serves the viewer a more abstract and surrealistic approach to reality. He incorporates his lettering technique and graphic imagery from his past as a graffiti artist into the portrait paintings, that is heavily inspired by his own personal life experiences and the impressions of the surrounding world. He has exhibited his paintings in various underground galleries in Copenhagen, and is now embarking on a mission to enter the european and american art scene with a new collection of paintings. In addition to this, he takes on graphic design tasks, bodypaint on models, and airbrush and spraypaint commision jobs.